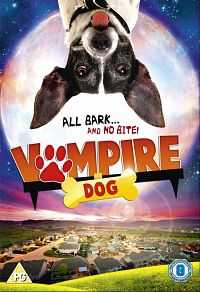 Vampire Dog is a Canadian family film released in 2012 and directed by Geoff Anderson. The movie stars Collin MacKechnie, Julia Sarah Stone, Amy Matysio, Ron Pederson and Jodi Sadowsky. Vampire dog (Fang) is voiced by Norm Macdonald. In Transylvania a woman in her kitchen cooks a jelly pudding. When she leaves the kitchen, a dog suddenly appears from nowhere and eats the pudding. The woman witnesses the dog suddenly disappear. Back at home, the dog’s owner questions who should look after the pet after his death.