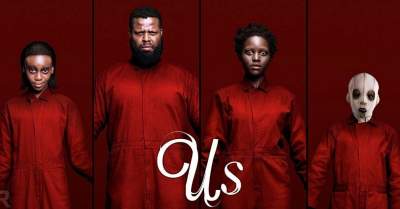 A foreword states that there are many underground tunnels in the United States that have no known purpose.

In 1986, a young girl, Adelaide Thomas, watches a commercial for Hands Across America. At night, at the Santa Cruz Beach Boardwalk, she wanders off from her parents and enters a funhouse, where she encounters an identical doppelgänger of herself in the house of mirrors.

Years later, now-adult Adelaide goes on vacation with her husband, Gabe Wilson, and their children, Zora and Jason. She is apprehensive about the trip, haunted by memories of the encounter and her recovery, during which she stopped speaking and withdrew from her family. Despite her misgivings, the family meet with their friends Josh and Kitty Tyler and their twin daughters at the beach. On the way there, they witness paramedics taking away the bloody body of an old man. Jason later sees someone strangely similar to the old man, standing still with his arms outstretched and hands bloody.

That night, a family of four dressed in red appears in the driveway before breaking into the house. Cornering the Wilsons’ in their living room, they are revealed as the Wilsons’ doppelgängers. They include Pluto (Jason’s fire-loving, scarred double), Umbrae (Zora’s sadistic double), Abraham (Gabe’s double), and are led by Red, Adelaide’s double, the only one who can speak, albeit in a guttural raspy voice. Red explains that they are called the “Tethered”, they share a soul with their counterparts, and they have come to “untether” themselves. She tells them the story of a girl who lives a life of comfort and joy, while her “shadow” remains in the dark, suffering while living a mirrored, painful version of the girl’s life and hating the girl for it. The Wilsons are separated and terrorized by their doppelgängers. Adelaide is handcuffed and Jason discovers that Pluto mirrors his actions. After Gabe manages to kill Abraham, the Wilsons are able escape on their boat together.