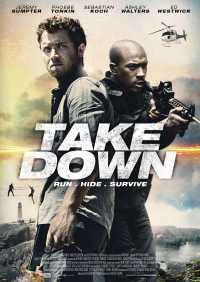 BERLIN — Certainly no “Taken” or “The Brave One,” “Takedown” — formerly known as “Transparency” — does not necessarily advance the vigilante genre but manages to undermine it at times with surprising effectiveness.

DVD and other small-screen sales should be in keeping with the assembled name value for the film, which, had it not been shot in English to begin with, certainly would be a contender for a bigger-budgeted U.S. remake. The film played at Germany’s Oldenburg International Film Festival.

Writer-director Raul Ingles doesn’t even pretend to aim for more than a solid B-movie veneer, and sure enough, “Takedown” isn’t particularly original during its first half. Then the film sneaks off the beaten path, offering a genuine surprise midway through and a melancholy ending more apt for a European art house film.

Former cop David (Lou Diamond Phillips) never got over the fact that five years ago, he could not save his daughter from a brutal attack by a sexual predator; it cost him his marriage and his job. Apparently, he’s back on his feet, working as a rent-a-cop and enduring life one mindless one-night stand at a time.