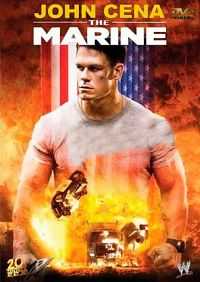 The Marine is a 2006 American action film directed by John Bonito. The film stars John Cena, Robert Patrick and Kelly Carlson. It was produced by the films division of WWE, called WWE Studios, and distributed in the United States by 20th Century Fox. In Iraq, John Triton (John Cena) of the United States Marine Corps is closing in on an al-Qaeda hideout, where a group of terrorists are preparing to behead several hostages. Disregarding direct orders to wait for reinforcement, Triton attacks the extremists and rescues the hostages. The next morning, his colonel informs Triton that he is being honorably discharged for disobeying direct orders.