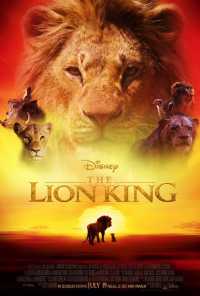 Technically speaking, it’s a marvel. Jon Favreau’s “live action” remake of Disney’s The Lion King possesses all the immersive detail and tactile immediacy of an unusually good nature documentary. It transports us. We can practically feel the fur on these animals, and we want to duck away from their thundering heels as the camera breathlessly rushes us through trembling grass and craggy ravines.

It’s hard to imagine that this has all been created in a studio, and that almost none of it is real. It’d be a great case of “How did they do that?” except that they did it so well that you forget that they did anything at all. “Oh, the lion is singing? Well, how ’bout that? I didn’t know a lion could sing. But there it is — a real lion, singing.”

That’s the good news. The not-so-good news is that, having entered the photorealistic realm, The Lion King’s mood too has changed. Suddenly, that iconic opening scene, with all the animals gathering to bow before the newborn lion cub Simba, held up like some sort of scepter of absolute power, doesn’t feel triumphant or moving,

as it did in its fantastical, animated setting. It feels queasily authoritarian. But of course, the filmmakers recognize that. So now, when the old king Mufasa (voiced again by James Earl Jones) shows the young Simba the extent of his domain (“Everything the light touches is our kingdom)

we now appropriately get some additional dialogue about how it’s not really his: “It belongs to no one, but it will be yours to protect.”

But by and large, this new Lion King hews pretty closely to the animated Lion King, at times even replicating the same shots and editing patterns as the original. And the effect can feel like a stunt — like someone decided to do a scene-by-scene re-creation using real-life animal footage.

It doesn’t help that the characters in some cases have been rendered with such realism that they have lost all human expression on their faces. Maybe that’s the idea — to not anthropomorphize them too much and to stay grounded in zoological authenticity. But they’re still talking, and singing, only now their faces are inexpressive; it’s a weird disconnect.