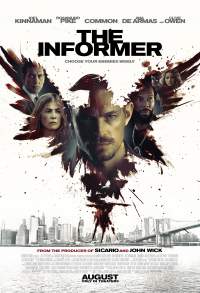 The Informer is a 2019 British crime thriller film directed by Andrea Di Stefano and written by Matt Cook, based on the novel Three Seconds by Roslund/Hellström. It stars Joel Kinnaman as the title character, alongside Rosamund Pike, Common, Ana de Armas, and Clive Owen.

Pete Koslow, a reformed criminal and former special operations soldier, is working undercover for crooked FBI handlers to infiltrate the Polish Mob’s drug trade in New York. In a final step toward freedom, Koslow must return to the one place he has fought so hard to leave, Bale Hill Prison, where his mission becomes a race against time when a drug deal goes wrong and threatens to identify him as a mole. On discovering one of his handlers, Montgomery, intends to let him and his family die in order to use their homicides as hard evidence to ensure convictions, Koslow must turn to Grens, a member of NYPD’s Organized Crime Division to ensure his loved ones’ safety as he looks for a way to escape when his cover eventually gets conveniently blown.