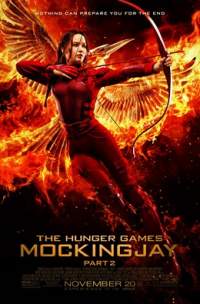 After being rescued from the destroyed arena in the 75th Hunger Games, tributes Katniss Everdeen, Beetee, and Finnick Odair are taken to District 13, a below-ground district isolated from Panem that has been spearheading the rebellion. Katniss is reunited with her mother and sister Prim and is introduced to President Alma Coin, the rebel leader. Katniss is told that her arrow destroying the forcefield led to riots in over half the districts, joining District 13 in the rebellion, which caused Snow to bomb District 12 in retaliation. Coin asks her to become the “Mockingjay”—a symbol of the rebellion—as part of a “hearts and minds” strategy. Katniss reluctantly agrees after seeing Peeta being manipulated on state television to quell the rebellion. She visits the ruins of District 12, her old house somehow untouched with white roses from President Snow inside.

Katniss meets her film team and is given Effie Trinket as a stylist and close friend, Gale, as a bodyguard. They go to District 8 where Katniss is filmed being saluted by dozens of wounded civilians at a hospital; Snow, seeing the footage, orders an airstrike at the hospital, killing everyone inside. The crew films Katniss and Gale shooting down two Capitol hovercrafts and Katniss’ rage-filled threat: “If we burn, you burn with us.” District 7 revolts, shouting the same phrase and killing Peacekeepers.