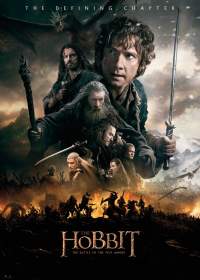 Spoilers for Peter Jackson’s rendition of ‘The Hobbit’ follow.

Well we’ve come at last to the mountain, to the titular battle of the five armies, and to the end of the road both for Bilbo and his motley band of dwarves, and for the Peter Jackson era of the Middle-earth saga.

We have gone there and back again, and this—the sixth film in Jackson’s sprawling fantasy series—brings us full circle.

As the credits roll on this final entry, I find myself a little sad and a little happy all at once. I’ve been a critic and a fan of Jackson’s work. There has been much to love in both his Lord of the Rings trilogy and in the three Hobbit films—and there has been plenty to gripe about as well. But most of all, Jackson’s version of these stories has become the culturally predominant one.

Peter Jackson has redefined what we think of when we think about Middle-earth and its characters, and while all six films have been cinematic triumphs, they’ve also taken vast artistic license. With The Hobbit Jackson has taken a great deal more liberty than he did with the original trilogy.

And here’s where things get a little mixed up for me, where my enjoyment of the films and my irritation with them collide. Jackson’s changes are at times brilliant and at times infuriating. Let’s start with the good.