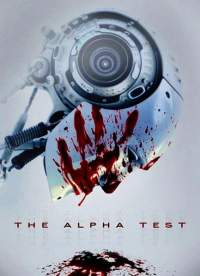 A suburban family drives their new gadget, The Alpha Home Assistant, to a killing rampage after mistreating and abusing it, leading to a full A.I. uprising.

Kudos to writer, director, camera operator and story teller Aaron Mirtes for this independently produced slice of suburban sci-fi horror. Mirtes has taken a very simple story for the genre, but makes it so simple and ordinary and free from frills that it is nothing but unsettling and creepy. Everything it should be when it comes to human / robot interfacing.

Mirtes takes influence from the likes of A.I, Westworld and even RoboCop when it comes to Alpha, played with haunting simplicity by Rae Hunt. While no C-3P0, Alpha is here to help serve its human masters the best it can, and again with no frills or tacky CGI effects. Hunt is kitted out with only a disturbingly leathery synthetic/ mechanical head (think RoboCop without the mask), and her natural slender frame.

From the start it’s clear that this family isn’t the most warming and welcome. Only daughter Lily shows Alpha any respect and decency, robot or not, and their bond is rather sweet and well played out. All Alpha can do, is observe. Observe the world around it, the people around it, the television and society around it, and then learn from it. From swear words to violence on TV, to emotion overheard in arguments and breakdowns, Alpha drinks in everything it can and try to apply it and fit in better.