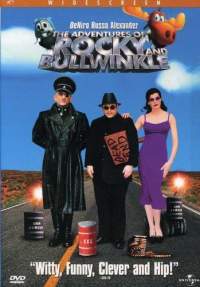 Thirty-five years after their television show’s cancellation in 1964, Rocket J. “Rocky” Squirrel and Bullwinkle J. Moose have been living off the finances of their reruns on TV. Their home, Frostbite Falls, has been destroyed by deforestation, Rocky has lost his ability to fly and the show’s unseen Narrator now lives with his mother, spending his time narrating his own mundane life. Meanwhile, their archenemies Fearless Leader, Boris Badenov, and Natasha Fatale have lost power in Pottsylvania following the end of the Cold War. However, the three escape to a real-world Hollywood film studio, where they trick executive Minnie Mogul into signing a contract giving her rights to the show, transforming the villains from their two-dimensional cel-animated forms into live-action characters.

Six months later, in Washington D.C., FBI agent Karen Sympathy and her superior, Cappy von Trapment, inform President Signoff that Fearless Leader intends to make himself President of the United States by brainwashing television viewers using his own cable television network named “RBTV” (“Really Bad Television”), which airs mind-numbing programming designed to zombify the public and persuade them to elect him as president. Karen is sent to a special lighthouse to bring Rocky and Bullwinkle into the real world by literally greenlighting a film starring the pair. Karen succeeds, with The Narrator being brought along as well but never being physically seen.