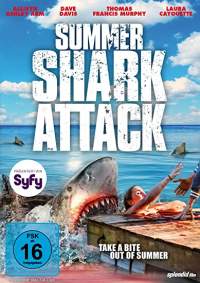 On a river, some teenagers are messing with firecrackers where they are killed by sharks except for a girl named Dawn (Ashton Leigh).

Meanwhile, teenage siblings Harrison (Dave Davis) and Molly Kaye (Allisyn Ashley Arm) are reluctantly going on a vacation to the Ozarks with their parents Rick (Michael Papajohn) and Diane (Laura Cayouette) and their grandmother (Sharon Garrison). Shortly after they arrive, the family unpacks as Molly “takes in nature” by reading on the docks while soaking her feet. Her boyfriend and Harrison’s best friend Curtis (Ross Britz) secretly arrives after taking a bus to the area.

While Harrison and Curtis meet eccentric local shopkeeper Jones (Thomas Francis Murphy), Molly accompanies her grandmother to one of the lakes where her grandmother is soon devoured by a shark. She tells Harrison and Curtis, who later find the grandmother’s hat and severed arm. Harrison is attacked by a shark only for Jones to arrive and shoot it. After the group fails to convince the local sheriff of the threat, Jones tells the group that he’s seen sharks in the lakes before and they have never attacked people. As a result, he believes something has riled them up.

Meanwhile, Rick and Diane go out on one of the lakes on a canoe ride. Harrison returns to their cabin to find them gone and decides to drive around the lake to search for them while Molly, Curtis and Jones decide to go out on the lake, armed with Jones’ large arsenal of guns and other weapons. They soon discover that there are six sharks in the lake.