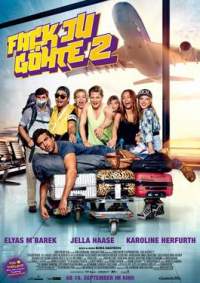 Fack ju Göhte 2 (intentional misspelling of Fuck you, Goethe) is a 2015 German comedy directed by Bora Dagtekin and starring Elyas M’Barek, Karoline Herfurth and Jella Haase, while upcoming actors Max von der Groeben and Volker Bruch appear as supporting roles. The film, produced by Constantin Film, is the sequel to the 2013 film Fack ju Göhte. It premiered on September 7, 2015 in Munich and was released nationwide on September 10, 2015. It was released in the United States under the title Suck Me Shakespeer 2.

Mr. Müller is not satisfied with his new work at the Goethe-Gesamtschule. Having to get up early and correcting exams annoys him. Director Gerster wants to improve the image of the school because she wants to be a symbol of the new public campaign. To achieve this, she wants to take away the partnership from the Schiller gymnasium with a school in Thailand. So Mr. Müller, Ms. Schnabelstedt and the 10/B class must go on a school trip to Thailand to a remote village.