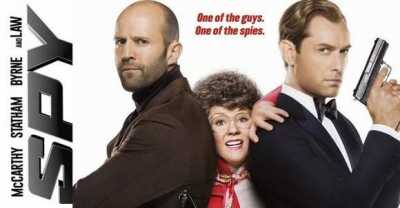 Getting into the danger zone after a decade at Langley in service of a pretty-boy spy (Jude Law, expertly spoofing 007), McCarthy knocks every laugh out of the park. And not by being an idiot. Susan has what it takes to bring down baddies (including a sublimely droll Rose Byrne as a Bulgarian nuclear-arms dealer)

And make converts of macho agents (Jason Statham, hardass and hilarious). Susan, who looks like “someone’s homophobic aunt,” has been sold short by her boss (Allison Janney). And McCarthy, who looks like no one’s idea of Hollywood glamour, knows the feeling. Good to see them both make suckers of their critics.