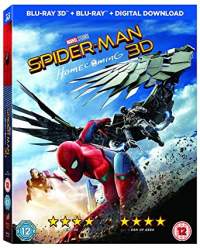 You’ve been waiting for it for years, and now Spider-Man: Homecoming is ready to dance up and down at your local movie theater! No, not the emo Peter Parker dancing from Spider-Man 3, but some serious, teen awkwardness and action adventure dancing. But while the film looks pretty spectacular, you may be wondering if it actually deserves a special big screen experience. Which means it’s time to ask that burning question: to 3D, or not to 3D?

While we won’t be reviewing the content of the film, as we’ve already covered that here, we will be going into the finer points of Spider-Man: Homecoming’s IMAX 3D presentation. No spoilers, no speculation, just pure 3D evaluation. So if you’re ready, web up and swing into our run-down of the large format 3D version of Peter Parker’s first solo adventure in the Marvel Cinematic Universe.

With both the high-flying and the street level action that Peter Parker engages in, Spider-Man: Homecoming is a fantastic film to conceptually put into the 3D format. The reality certainly doesn’t disappoint, as a lot of the more larger-than-life aspects of Jon Watts’ first blockbuster have the opportunity to pop with the added depth and engagement that the experience provided. A lot of Spider-Man as a character relies on a balance between personal drama and big time amazement, and both are in full force here and look great in 3D.