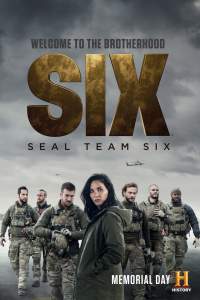 Six (stylized as SIX) is an American military drama television series. The series was ordered by the History channel with an eight-episode initial order. The first two episodes were directed by Lesli Linka Glatter. Six premiered on January 18, 2017.

Six was renewed for a second season of 10 episodes on February 23, 2017, which premiered on May 28, 2018, with the second new episode airing during its regular timeslot on May 30, 2018. On June 29, History announced they had cancelled the series after two seasons.

The series chronicles the operations and daily lives of operators who are part of the U.S. Naval Special Warfare Development Group (DEVGRU), more commonly known as SEAL Team Six, which is one of the U.S. Armed Forces’ primary counter-terrorism units.