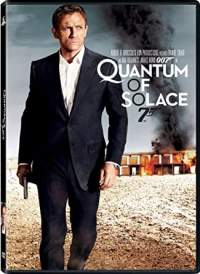 When the 16th James Bond film, Licence to Kill, was released in 1989, it was widely reported that its working title, Licence Revoked, had been altered thanks to a survey revealing that fewer than 50 percent of Americans knew the meaning of the word “revoked.” How far we have come since then. Bond’s last outing, Casino Royale, was not only his best in over three decades, it was also his smartest, and its franchise-record grosses evidently persuaded 007’s custodians that we Yanks aren’t quite such a load of morons after all. How else to explain Quantum of Solace, the year’s most obscurely titled release not directed by Charlie Kaufman?

Like Licence to Kill, Quantum is a tale of vengeance; unlike it, the new film is also a sequel, in which the lethal debt to be paid off is held over from a previous picture. Specifically, Bond (Daniel Craig) goes off the grid to track down the shadowy villains responsible for the death of his Casino Royale lover, Vesper, who was in life a mouthwatering accountant and remains in death a mouthwatering martini. (Denied the consolations of the former in Quantum, Bond permits himself those of the latter.