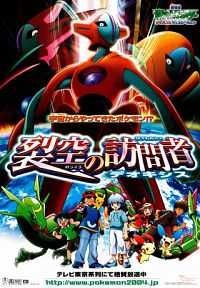 A mysterious meteorite is hurtling towards the earth. During its entry into the atmosphere, it almost wounds Rayquaza, a sky guardian living in the ozone layer. The meteorite crashes into a polar zone, revealing two egg-shaped objects. The purple egg regenerates into a Deoxys and picks up the green egg. Rayquaza descends from the ozone layer to fight the invader (believing it to be an enemy). A battle ensues, destroying a nearby research site and traumatizing a young boy Tory, scared by a stampede of Spheal, Sealeo, and Walrein. Deoxys engages Rayquaza and the two take turns delivering devastating blows to each other, but the fight draws to a conclusion when Rayquaza surprises the alien Pokémon and fires a point blank Hyper Beam at it. Deoxys’ body is destroyed, leaving only the purple crystal in its chest that falls into the sea, while some researchers take a similar green crystal that it found with them to Hoenn. Beneath the sea, the injured Deoxys regenerates and waits.