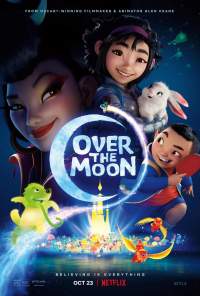 Over the Moon is a 2020 computer-animated musical adventure comedy-drama film directed by Glen Keane and co-directed by John Kahrs, from a screenplay by Audrey Wells. The film is produced by Pearl Studio and Netflix Animation, and animated by Sony Pictures Imageworks. It stars the voices of Cathy Ang, Phillipa Soo, Ken Jeong, John Cho, Ruthie Ann Miles, Margaret Cho and Sandra Oh. It is the first international film to be directed by Keane, who serves as an animator for Walt Disney Animation Studios; and the second film produced by Pearl Studio, after DreamWorks’ 2019 animated film Abominable.

The film was first shown at the Montclair Film Festival on October 17, 2020, followed by its Netflix and select theaters release on October 23. The film received positive reviews with critics praising the animation though the story was criticized for being derivative.