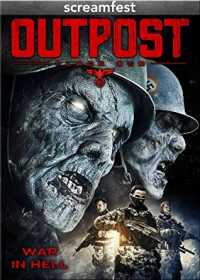 Outpost is a 2008 British horror film, directed by Steve Barker and written by Rae Brunton, about a rough group of experienced mercenaries who find themselves fighting for their lives after being hired to take a mysterious businessman into the woods to locate a World War II-era military bunker. In a seedy bar in a town ravaged by war, scientist and businessman Hunt (Julian Wadham) hires former Royal Marine turned mercenary D.C. (Ray Stevenson) to assemble a crack team of ex-soldiers – Prior (Richard Brake), Jordan (Paul Blair), Cotter (Enoch Frost), Voytech (Julian Rivett), McKay (Michael Smiley) and Taktarov (Brett Fancy) – to protect him on a dangerous journey into no-man’s land. Their mission is to scope out an old military bunker in Eastern Europe.