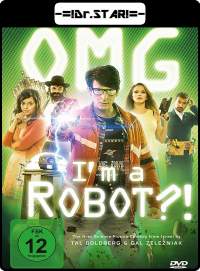 Actors Yotam Ishay and Tzahi Grad co-star in the lead roles. It also presents a Jewish “R2-D2” dubbed by Rob Schneider. It was produced by Amir Manor, shot by Tomer Shani and edited by Yiftach Paul Shoshan.

Danny is amazed to find out he is a deadly robot. With renewed hopes and robotic forces, and with the help of his macho boss and a small Jewish “R2D2” (Dubbed by Rob Schneider), Danny sets off to rescue the love of his life.

The film had his international premiere on 14 October 2016 at the Sitges Film Festival in Catalonia, Spain, and was selected as an official nominee in the festival’s “Midnight Extreme” competition. In 2017 the film screened in several genre film festivals, including Italy’s Fantafestival, Portugal’s Fantasporto, Brazil’s Fantaspoa, Boston Science Fiction Film Festival and was selected to be the opening film of the Other Worlds Austin SciFi Film Festival.