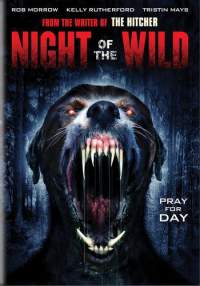 “Night of the Wild” is a lot like those terrible seventies nature run amok movies. It’s badly directed, horribly edited, has terrible continuity issues, and garners some inadvertent camp. All that’s missing is an obligatory nude scene. “Night of the Wild” is brimming with potential, beginning with a premise that could have amounted to a great movie. A mysterious green meteor crash lands on a small farm town spreading its meteorites. Suddenly the local animal population begin turning on their masters, becoming violent murderous monsters. Without explanation or warning, now the humans must fight to survive and figure out a way to make it out of their town. “Night of the Wild” pretty much dips in quality after the first ten minutes, creating a story that the budget and resources couldn’t possibly afford.

It’s explained that the meteor is making all the wildlife turn on their masters. There’s even a scene where a clowder of cats lurk in a tree about to pounce on an unsuspecting little girl. But that’s as far as the movie goes. Mainly the movie focuses on the dog population becoming murderous and violent. I guess they couldn’t hire cat trainers. There’s even the hint of cows turning on their owners, but I doubt watching cows trample their owners would be much fun. When we actually do see the dogs attack, most of the editing is so bad, you’ll spend your time trying to pretend you don’t notice the glaring errors in animal choreography. In one scene, Rob Morrow is being attacked by dogs, and as the director pans away, it’s painfully clear Morrow is just holding a dog with both hands faking an attack.