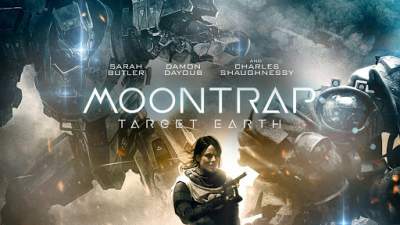 On July 20, 1969, during the last phase of the Apollo 11 mission to the Moon, a robotic eye emerges from the lunar soil and takes notice of the landing module as it takes off. The eye buries itself again.

20 years later, the Space Shuttle Camelot encounters a derelict spaceship in orbit around Earth. Mission commander Colonel Jason Grant (Walter Koenig) leaves the Shuttle to investigate. He discovers a reddish-brown pod and a mummified human corpse. Both things are brought back to Earth, where it is found that they originated on the Moon some fourteen thousand years ago. Shortly thereafter, the unattended pod comes to life. It builds itself a cybernetic body with parts from the lab and pieces of the ancient corpse. The cyborg kills a lab technician and exchanges fire with security guards before Grant destroys it with a shotgun blast to the head.

Using the last completed Apollo rocket, Grant and fellow astronaut Ray Tanner (Bruce Campbell) go to the Moon on a search-and-destroy mission. They discover the ruins of an ancient human civilization. Inside, they find a woman in suspended animation who identifies herself in a rudimentary fashion as Mera (Leigh Lombardi). Mera later reveals the name of the killer cyborgs — the Kaalium. They survive the attack of a spider Kaalium and return to the Lunar Module, with Mera wearing her own spacesuit but it turns out that the Kaalium have stolen the module. The Kaalium also shoot down the command module, leaving the astronauts stranded on the Moon. In subsequent attacks by the Kaalium, Tanner is killed, Grant and Mera are taken prisoner, and the Kaalium head to Earth.