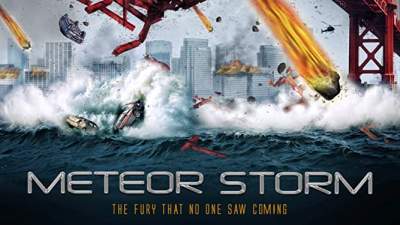 San Francisco becomes a target for waves of destructive meteors after a rogue comet swings past the earth. For astro-physicist, Dr. Michelle Young (Kari Matchett), what was meant to be a once-in-a-lifetime celestial event, turns into a nightmare as thousands of meteors transit through the atmosphere, destroying San Francisco.

The military contacts Young to ask her to help investigate this extinction-level event and to determine what is causing the seemingly targeted strikes. Meanwhile, Colonel Tom (Michael Trucco) is responsible for the evacuation of the Bay area.

Michelle discovers that Element 120, designated Unbinilium, is the main cause of meteors targeting the San Francisco area. Millions of years ago a Unbinilium asteroid hit the Earth and created the entire bay. Dr. Young immediately reports her findings to Colonel Jack Clancey (Viv Leacock) about Unbinilium. Unfortunately, they discover that a gigantic asteroid, named Apophis, is on a collision course with Earth. Their numbers show that the rock will hit the San Francisco bay within four hours.