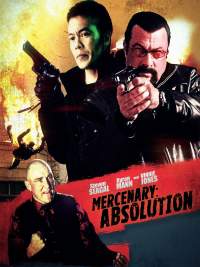 Absolution (also known as The Mercenary: Absolution) is a 2015 action crime film directed by Keoni Waxman and starring Steven Seagal[1][2] The film is a sequel to A Good Man, and is the sixth collaboration between Steven Seagal and director Keoni Waxman. The film also marks the third collaboration between Seagal and Jones (who starred in 2005’s Submerged and 2014’s Gutshot Straight), and between Seagal and Mann (who previously starred in 2003’s Belly of the Beast and 2009’s A Dangerous Man).

John Alexander (Steven Seagal) is a contract killer. After encountering a girl on the run from a mob boss (Vinnie Jones) with powerful political connections, he is torn between protecting the girl and remaining loyal to the government agency that hired him for a mission.

Seagal said he was attracted to the lead role because “I’m always trying to find something a little bit different from what people have seen me do before. I wanted to play somebody kind of mysterious and on the edge, so you don’t really know if you like him or hate him until the middle of the movie.” He says he wrote his character’s line “I want to do one good thing before I die even if I die in the process of doing it”

It was one of several films Seagal made with Keoni Waxman. “I think that Keoni is one of the brightest young men out there,” said Seagal. “I think he’s a very good director. I think he has a wonderful story-mind, which is very important – in other words, he doesn’t just have to film what’s on the page; he understands what’s on the page. I think he’s a wonderful director who understands editing, looping, dubbing, mixing, foley… he just understands all of that stuff. He’s a great friend: very ethical and very moral.