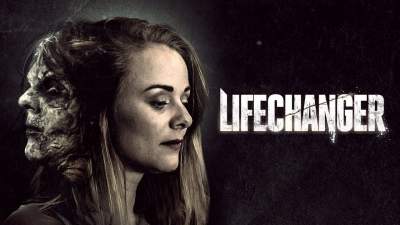 Fitting that writer director Justin McConnell’s fourth feature length film LIFECHANGER is a product of Canada, the northern neighbor of Hollywood that gave us decades of body horror thanks to David Cronenberg. After all, McConnell’s latest film that premiered this past July at FantasiaFest is first and foremost a tip of the hat to the genre, burrowing itself into the frontal lobe like a bullet. It’s a genre that, as of late, has been gnawing its way through film with Leigh Whannell’s Upgrade implanting a heavy-dose of awesome into our cerebral cortex as well as Venom’s uh, uneven yet intoxicating bite taking hold of Tom Hardy fans everywhere.

Like the human body it’s always changing, growing from the bowels of horror to stand firmly on the shoulders of other genres, often speaking volumes about the current climate. And while neither a life changer nor a game changer (and certainly without much of a message), LIFECHANGER does manage to move with the precision of a hit-man and the impact of a whiskey on the rocks; just don’t expect a chaser.

Opening on a young woman in bed, McConnell’s film quickly sets about establishing its narrative at a discombobulating pace. This is Drew, a shapeshifter who survives by murdering and jumping from one body to the next. There’s no semblance of who or what he once was outside of an aged narration (voiced by Bill Oberst Jr.), and not much is offered in explaining any of it. With a run-time of less than 90 minutes, McConnell quickly gets to work showing us the grotesque transformation that lies within his film, one that feels like a hybrid between Tobe Hooper’s Lifeforce and Jack Sholder’s The Hidden. Victims are rattled and sucked dry, leaving withered and vein cracked corpses (courtesy of special effects artist David Scott and make-up artist Alexandra Anger) that are hacked limb to limb and burned in a vacant field that’s littered with blackened bones.