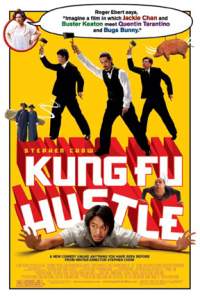 In 1940s Shanghai, petty crooks Sing and Bone aspire to enroll in the notorious Axe Gang, which rules the metropolis thru violence under the management of the bloodless-blooded Brother Sum. The visit Pigsty Alley, a rundown slum, where they claim to be Axe Gang members and attempt to extort the residents earlier than being chased off by using the slum’s Landlady.

In an try and bluff them, Sing throws a firecracker that he claims will signal the relaxation of the group, which blows up the hat of a minor Axe Gang boss passing by. Sing blames the residents for throwing the firecracker, and the boss assaults a barber, best to be struck with the aid of an unseen assailant. The gang then requires reinforcements even as three of the tenants—Coolie, Tailor, and Donut—reveal themselves to be kung fu masters and overcome the gang participants. Fearing the Axe Gang’s retaliation, the Landlady fast evicts the trio.

Infuriated with the aid of the lack of his guys, Brother Sum captures Sing and Bone, intending to kill them for posing as gang members. Sing narrowly frees himself and Bone along with his lock-picking competencies, impressing Brother Sum, who permits them to sign up for the crowd at the situation that they kill a person.

Lamenting his failure, Sing recalls his early life to Bone: he were duped into believing he changed into a herbal-born kung fu genius with the aid of a vagrant promoting a martial arts pamphlet, giving the vagrant his meager financial savings to buy the pamphlet. Sing practiced the pamphlet’s Buddhist Palm approach and tried to shop Fong, a mute lady, from bullies, only to be beaten and humiliated while the bullies pointed out the pamphlet expenses a mere 20 cents. Sing then became adamant the coolest guys by no means win and resolved to be a villain.