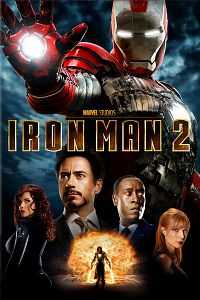 “Iron Man 2” is a polished, high-octane sequel, not as good as the original but building once again on a quirky performance by Robert Downey Jr. The superhero genre doesn’t necessarily require good acting, but when it’s there (as in “Iron Man” and “The Dark Knight”), that takes it up a level. Downey here gives us a Tony Stark who is cockier and more egotistical than ever. Or, and here’s the key, he seems to be.

All heroes have a fatal flaw. That’s one of the rules of the road in fiction. Tony Stark’s flaw is that he is dying. The megalomaniac act comes naturally, but now it’s useful as a cover-up. His chest-mounted battery pack, or life source, or whatever it is, is running low and poisoning his blood. It works by using the rarest element in the periodic table, and to renew it would require discovering or inventing a new element. Not easy.

So Tony stands aside at big events and uses a little blood monitor–helpfully named the “Stark Blood Monitor,” in case anybody sees it–that tells him his Blood Toxicity is relentlessly climbing toward death. This is his private fear, not even shared with the loyal Pepper Potts (Gwyneth Paltrow), who is running his company.