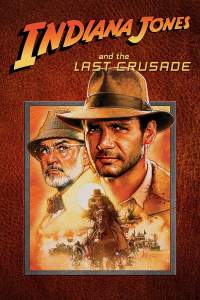 In 1912, 13-year-old Henry “Indiana” Jones, Jr. is horseback riding with his Boy Scout troop at Arches National Park in Utah. While scouting caves, Jones discovers a group of grave robbers who have found a golden crucifix belonging to Francisco Vázquez de Coronado and steals it from them, hoping to donate it to a museum. The men give chase through a passing circus train, leaving Jones with a bloody cut across his chin from a bullwhip and a new phobia of snakes. Jones escapes but the local sheriff makes him return the cross to the robbers, who immediately turn it over to a mysterious benefactor wearing a Panama hat. Impressed with the boy’s bravery, the leader of the robbers gives Jones his hat.

In 1938, Indiana Jones fights “Panama Hat” and his henchmen on a ship off the coast of Portugal. Escaping overboard just before the ship explodes, he recovers the cross and donates it to Marcus Brody’s museum. Later, Jones learns from Walter Donovan that his father, Henry Jones, Sr., was searching for the Holy Grail using an incomplete inscription from a stone tablet as a guide and has since vanished. Jones receives Henry’s Grail diary via mail from Venice and heads there with Marcus, where they meet Henry’s Austrian colleague Dr. Elsa Schneider.