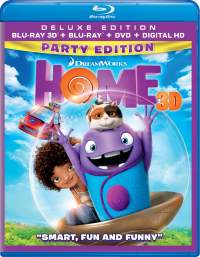 ihanna makes her feature animation voice debut in this DreamWorks family movie: she plays Tip, a lonely kid who befriends a bewildered little creature called Oh, part of a cowardly alien race called Boov, in retreat from their enemies, and currently using Earth as a huge hideout. Oh is voiced by Jim Parsons – the nerdy scientist Sheldon from TV’s The Big Bang Theory. Oh’s dysfunctional, semi-grammatical way of speaking (“This is not a sustainable friendship model”) is a funny-annoying tic which takes a little time to grow on you. But once it has, Home is an entertaining odd-couple comedy on very traditional lines, and the reason for Oh’s name is funny, too.

As the film is in 3D, there is naturally a fair bit of flying through the air – in a wackily modified small car. This is a likable children’s film, although there is a structural flaw: the Boov are supposed to be so hilariously timid, and yet they colonise Earth with brutal efficiency, moving Earthlings into what look like mass detention camps in Australia. So they can’t be that wussy, and it slightly muddles the joke. There is one unexpectedly sharp moment. Tip says she resents the way the Boov have stolen and subjugated her planet. Indignant Oh says that they merely “liberate and befriend”. Perhaps it’s a satire of western foreign policy in the Middle East.