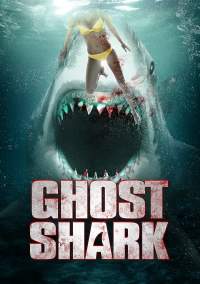 When a great white shark eats the potential catch of a sport fisherman, the man and his daughter violently retaliate by sadistically torturing and killing the shark. The shark’s corpse then sinks to the bottom of an underwater cave. It is subsequently resurrected as a ghost shark due to the cave’s mysterious paranormal properties.

Now hungry for revenge, the ghost shark eats his redneck killers, along with the captain of their boat. It eventually sets its sights on the rest of the local community in the seaside town of Smallport, Florida. Due to the great white’s new spectral form, it can attack and kill anyone as long as there is even the smallest amount of water nearby. This allows it to emerge out of a swimming pool, a bathtub, a bucket, a metal pipe, and even a drinking cup. It kills many people in several locations.

Though the terror is seemingly out of control, a group of young people trying to find answers end up having their pleas ignored. The local mayor is in the midst of his re-election campaign, and other authorities are unwilling to believe in the ghost. The teenager Ava Conte (Mackenzie Rosman) vows to put an end to the specter, after it devours her father and several friends. She teams up with a local lighthouse keeper, named Finch (Richard Moll). Finch is a drunken figure who claims to know the secrets to the shark’s new-found form. Reportedly, when the cave was still above water, it was where a dying African-American slave put a voodoo[disambiguation needed] curse on the entire town.