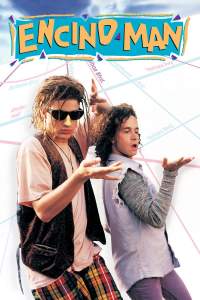 During the first ice age, a caveman (Brendan Fraser) attempts to make fire with his cavewoman partner (Sandra Hess). An earthquake causes a cave-in that buries the two of them.

This segues into a present-day Los Angeles earthquake that awakens average teenager Dave Morgan (Sean Astin). He, along with his best friend Stoney (Pauly Shore), strives to attain popularity in high school, but comes off more like a reject or an outcast. Dave is in love with Robyn Sweeney (Megan Ward), a sweet and attractive girl who had been his best friend during grade school, and until she reached adolescence, had been rejected by Dave on several occasions.

Her boyfriend, Matt Wilson (Michael DeLuise), is a stereotypical jock and school bully, who is constantly responsible for making both Dave and Stoney the objects of ridicule by humiliating them in various ways, usually directly due to Dave’s affections toward Robyn.

One day as Dave is digging a pool in his backyard, he comes across a chunk of ice that has the body of a man in it following an earthquake. They leave the ice block unattended in the garage and space heaters left on cause the ice to melt, releasing the caveman. The caveman then encounters a garbage truck, which he misinterprets as a mammoth from his time, and a television, which he discovers upon entering the living room.