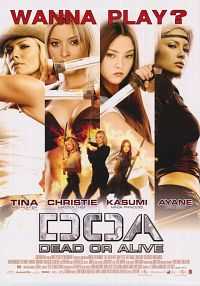 Four female fighters who participate in the DOA martial arts tournament start off as rivals. As the tournament progresses, they form a team to fight against another force. In a year of big, dumb, enjoyable B-movies, DOA strikes a blow for girl power. Still, best wait for the DVD. Three barely clad women compete in a martial arts contest against the world’s best fighters.