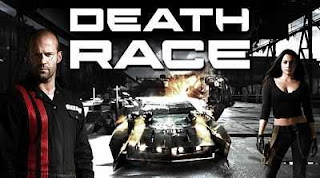 The new Death Race, loosely based on 1975’s cult favorite Death Race 2000, imagines a time in the not-so-distant future when sensation-hungry audiences tune in to watch violent demolition derbies in which convicts in race cars smash and maul one another. The future already is here.

This ultraviolent movie has been engineered to stimulate exactly the kind of audience blood lust that the script ostensibly deplores. Young males will lap up the gore, though the movie won’t reach beyond the core audience of car nuts and action freaks.

Once upon a time, producer Roger Corman and director Paul Bartel made a campy B movie that reveled in violence but also had a sense of humor. Most of the comedy is missing from this more realistic remake, which begins at full blast with the obligatory frenetic cutting and deafening sound effects.

The script by director Paul W.S. Anderson quickly sets up the premise: Jensen Ames (Jason Statham) is framed for the murder of his wife and sent to a maximum-security prison, where the devious warden (Joan Allen) offers him a chance at freedom if he wins the death race against the prison’s most sadistic killers. Of course, she has no intention of honoring her pledge, but she underestimates Ames, who knows how to kick butt as well as burn rubber.