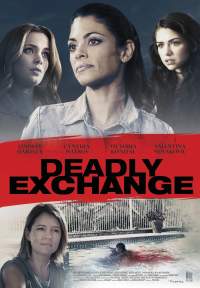 After the disaster that was Ex-Wife Killer (which is thankfully already fading from memory), Lifetime redeemed itself with this memorably melodramatic tale about an exchange student with some serious Mommy issues.

It’s been a tough time for high school student Blake Winters (Victoria Konefal), who is still reeling from the deaths of her father and sister. But with the support of her mother Samantha (Lindsay Hartley) and boyfriend Jack (Rhys Matthew Bond), Blake is on the road to recovery. She also has a new friend and houseguest to help in the process in the form of British exchange student Chloe Miller (Valentina Novakovic)!

At first glance, Chloe appears to be a thoroughly sweet girl who wants to help Blake move on from her past trauma and improve herself in school. Hell, no sooner has Chloe entered her life does Blake get accepted on the cheer squad and has a pool party afterwards! But then, Chloe begins pressuring Blake to stop seeing Jack and things spiral downhill quickly….