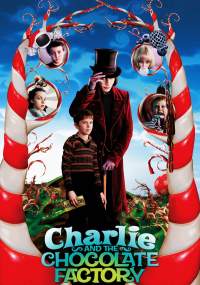 Charlie Bucket and his family live in poverty near the Wonka Factory. The company’s owner, Willy Wonka, has long since closed his factory to the public due to problems concerning industrial espionage committed by his jealous rivals, which led him to shut down the factory for several years and fire all of his employees, including Charlie’s Grandpa Joe.

One day, Wonka announces a contest in which Golden Tickets have been placed in five random Wonka Bars worldwide, and the winners will receive a full tour of the factory as well as a lifetime supply of chocolate, while one will receive an additional prize at the end of the tour. Wonka’s sales subsequently skyrocket, and the first four tickets are found by the gluttonous Augustus Gloop, the spoiled Veruca Salt, the arrogant Violet Beauregarde, and the ill-tempered Mike Teavee. Charlie tries twice to find a ticket, but both bars come up empty. After overhearing that the final ticket was found in Russia, Charlie finds a ten-dollar note and purchases a third Wonka Bar. The Russian ticket is revealed to be a forgery just as Charlie discovers the real ticket inside the wrapper. He receives monetary offers for the ticket, but the cashier warns him not to trade it regardless, and Charlie runs back home. At home, Charlie says that he wants to trade it for money for his family’s betterment. After a pep talk from Grandpa George however, he decides to keep it and brings Grandpa Joe to accompany him on the tour.