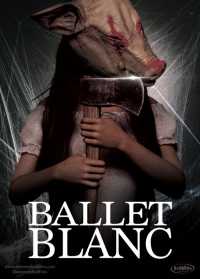 Bloody Ballet is admirable in its ambition. It can’t ultimately climb above the bracket it stuffed itself into being a genre homage on a budget so that it never feels quite either original or transcendently quality in its execution, but it tries its damndest and that echoes throughout the familiar ride.

We’ve got a sample platter film festival darlings that mix on occasion but mostly remain separated and somewhat alienated. We have the Suspiria meets Black Swan tale of best-of-rivals ballet dancers old, enough to make hanky-panky but young enough to think halter tops with slogans are a good idea. Then, shy of the halfway mark and so jarringly distinct I thought it was another film spliced into the dancer drama, we meet a ghost hunter guy wandering around the same locations as the dancer characters and blatantly being told ‘they don’t know that they’re dead’ by the traditional mysteriously vague original resident guy who always seems to inhabit horror films. So it’s not flashbacks we’re seeing, it’s ghostly visions. That might have made for a nifty twist but it’s spoiled as I stated rather rapidly it it was intended to be one.

Nobody has very much character. The dancers are chipper and not bad to look at in the slightest, but by the time you realize this is half slasher film you know a majority of them will be dead in no time. As for the ghost hunter guy he has about as much character as he has lines or dialogue, which is to say not much.

The circumstances are boilerplate, but at least the aesthetics are intriguing. A lot of effort went into recreating the inspirations of Bloody Ballet. The splatter is distinctly ‘of a time’ and when bathed in harsh lighting and with the ever-present thrum of synth or a cutaway sequence of surreal imagery you can in sere moments buy into this being a lost 70s drive in flick.