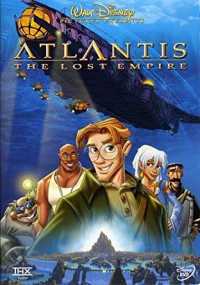 A mysterious explosion sends a tsunami towards the city of Atlantis. During the evacuation, the Queen of Atlantis is lifted up into a strange floating crystal, leaving behind her distraught daughter Kida. The crystal merges with the Queen and creates a dome preserving the city’s innermost district, and Atlantis sinks beneath the waves.

Nearly 8,000 years later, in 1914, Milo Thatch — a marginalized linguist at the Smithsonian Institution – discovers the existence of “the Shepherd’s Journal”, a manuscript containing directions to Atlantis. After Milo’s proposal to search for the Journal is rejected by the museum board, a mysterious woman, Helga Sinclair, introduces Milo to Preston B. Whitmore, an eccentric millionaire. Whitmore has already funded a successful effort to retrieve the Journal as repayment of a debt to Milo’s late grandfather, and recruits Milo to decipher the journal and join an expedition to Atlantis.

The expedition is headed by Commander Rourke, who also led the Journal recovery expedition. The crew includes Helga; Vinny, a demolitions expert; Molière, a geologist; Dr. Sweet, a medical officer; Audrey, a mechanic; Mrs. Packard, a radio operator; Cookie, a mess cook; and several trained soldiers. They set out in the massive submarine “Ulysses”, but are attacked by a mechanical leviathan that guards Atlantis’ entrance. The “Ulysses” is destroyed, leaving only a handful of survivors. Following the journal’s instructions, they enter a cavern and travel through a dormant volcano, where they are met by Kida, miraculously still alive and young. She and the other Atlanteans have forgotten their written language, and the society has languished, but they can understand English due to spoken Atlantean being the basis for many modern languages.