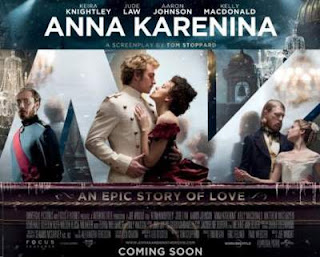 Stiva meets old friend Konstantin Levin, a landowning aristocrat despised by Moscow’s elite for preferring the countryside to city life. Levin says he loves Stiva’s sister-in-law, Princess Kitty, and Stiva encourages him to propose. Kitty declines as she hopes to marry Count Alexei Vronsky, a wealthy officer. Levin meets his older brother Nikolai, who has renounced his inheritance and married Masha, a prostitute. Nikolai suggests Levin marry a peasant. On the train, Anna meets Vronsky’s mother, Countess Vronskaya, isolated by her own infidelity. Anna meets Vronsky and they are instantly attracted to each other. Anna eventually convinces Dolly to take Stiva back. At a ball, Kitty attempts to dance with Vronsky, but he prefers Anna, upsetting Kitty. Vronsky tells Anna he must be wherever she goes.

Vronsky and Anna soon begin to stir gossip. Despite the fact that he has a promotion awaiting him in Tashkent, Anna persuades him to stay. They later meet and make love.

Stiva informs Levin that Kitty and Vronsky will not be married. Levin focuses on country life and contemplates marrying a worker’s daughter.