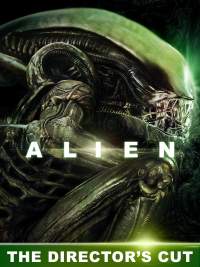 The commercial space tug Nostromo is on a return trip back to Earth with a seven-member crew in stasis: Captain Dallas, Executive Officer Kane, Warrant Officer Ripley, Navigator Lambert, Science Officer Ash, and two engineers, Parker and Brett. Detecting a transmission, the ship’s computer, Mother, awakens the crew. Company policy requires any potential distress signal be investigated, so they land on the moon, sustaining damage from its atmosphere and rocky landscape. Parker and Brett repair the ship while Dallas, Kane, and Lambert head out to investigate. They discover the signal comes from a derelict alien ship and enter it, losing communication with the Nostromo. Ripley deciphers part of the transmission, determining it to be a warning, but cannot relay this information to those on the derelict ship.

Meanwhile, Kane discovers a chamber containing hundreds of large, egg-like objects. When he touches one, a creature springs out, breaks through his helmet, and attaches itself to his face. Dallas and Lambert carry the unconscious Kane back to the Nostromo. As acting senior officer, Ripley refuses to let them aboard, citing quarantine regulations, but Ash overrides her decision and lets them inside. Ash attempts to remove the creature from Kane’s face, but stops when he discovers that its blood is an extremely corrosive acid. It later detaches on its own and is found dead. The ship is partly repaired, and the crew lifts off. Kane awakens with some memory loss, but is otherwise unharmed. During a final crew meal before returning to stasis, he chokes and convulses. A small alien creature bursts from Kane’s chest, killing him, and escapes into the ship.