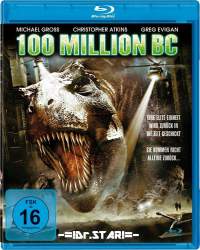 Dr Frank Reno has developed a time machine and needs the help of the army to go back and rescue his brother and friends who have been trapped in a time where dinosaurs roam for the past sixty years. This is the basis of the story and for the next 80 minutes or so we are treated to a rousing sci-fi/time travel romp.

Frank is played by veteran actor Michael Tremors Gross, who explains at the start of the film that an experiment dabbling in time travel went wrong and a party of explorers became lost. Proof of their existence and survival has been found in a cave in modern day Argentina. So Frank and the team go back in time to rescue the party.

Arriving in the prehistoric era, the army team and Frank are greeted by a number of ‘locals’ who promptly make mincemeat of a number of the crack army team. Helped out by Frank’s brother Erik and the remaining survivors of the original experiment, they travel back to modern day Los Angeles. However, ‘Big Red’, a resident of the prehistoric era, manages to come back as well and for the next 30 minutes it rampages through night-time LA. Due to the budget of the film, we don’t see Godzilla or Jurassic Park style carnage. We do however have a massive dinosaur smashing up cars and eating garbage collectors.

The production team have used old fashioned puppetry and CGI to fashion the critters. The puppetry works great and at times the CGI does show its low budget origins it doesn’t however detract from the whole ‘fun feel’ of the picture.